Living in the Land of the Black Swan –a synopsis

While devastating to the Service Sector, the pandemic is allowing Management Consultants the chance to catch up on trends relevant to their services. The CMCE is a learned society identifying and sharing new ideas for Consultants, and one of their latest Showcases was 'Living in the Land of the Black Swan'.

Before attending this event, I confess to never having heard of 'Black Swan' and its relation to Management Consulting. I am now better-informed, thanks to my attending!

By way of introduction to this Showcase, Nick Bush, our new director of the CMCE, introduced the audience to the book titled 'The Black Swan: The Impact of the Highly Improbable' by Nassim Nicholas Taleb as a worthy read. Nick then introduced each of the following three speakers:

Dr Simon Beard, Academic Programme Manager at the Centre for the Study of Existential Risk (CSER), University of Cambridge. Simon laid out a realistic yet theoretical assessment and perspective of a Black Swan event.

The definition of Black Swan came about in philosophy when Aristotle used the White Swan as an example of necessary relations and the Black Swan as an improbable one, however, neither are considered infallible. In London during the 16th Century, Black Swan was used to construe a statement that describes an impossibility.

Simon expounded on what Consultants may consider Black Swan occurrences: Covid-19 is an example, even though we know our forefathers came through flu pandemics at the start of the 20th Century.

Dr Beard concluded with what we, as Management Consultants, can define as a Black Swan risk event: risks for which we do not have living memory or descriptive history; e.g. the threat from disruptive technology or the risk derived from climate change.

In closing, Simon referred to the term Black Elephant, defined as a cross between a black swan (an unlikely, unexpected event with enormous ramifications) and the 'elephant in the room' (a looming disaster visible to everyone, yet which no one wants to address).

Dr Lara Mani, Research Associate in Communication at CSER, University of Cambridge. Lara's talk covered how one communicates an existential risk and converts this into actions.\

Dr Mani emphasised that, when dealing with risk, effective communication is essential as well as covering transparency (say what you do know); accessibility of information (make it available to all); trust (careful not to undermine the message); public (who, why, how to communicate).

Lara then illustrated the challenges of communication with several examples before reminding the listeners of the fundamentals: understand the risk; establish the audience; define the message; communicate.

Under the heading 'Scenario Planning', Lara provided us with her experience in St Vincent, where she worked with the elders to establish storylines relating to the hazards posed by the volcano on the island before converting the stories into video games for the youth to learn and transfer knowledge.

Guy Ferguson, CEO, Police Crime Prevention Initiatives. Guy, a former Borough Commander with Metropolitan Police, provided us with two practical anecdotes on the outcome of a highly improbable event – the Paddington Rail Disaster (1990) and Covid-19 from the viewpoint of the leadership of a small not-for-profit organisation.

Guy found himself testing these training techniques when called out to Ladbroke Grove – the Paddington Rail Disaster site. Guy found himself looking for guidelines from previous rail disasters with no experience or training for such a tragedy. Sadly, there were none, so in effect, this was Guy's Black Swan event. A plan was construed by pulling on many years of personal experience and identifying other personnel with disaster-related experience. Out of this disaster, Guy and his peers developed a Guideline to use when facing an individual Black Swan's challenge.

Guy's Guidelines are in use during the present pandemic.

After the speakers’ presentations, there was time for various questions – the number showing the interest derived from this Showcase.

A most pleasant talk and I look forward to attending the next. 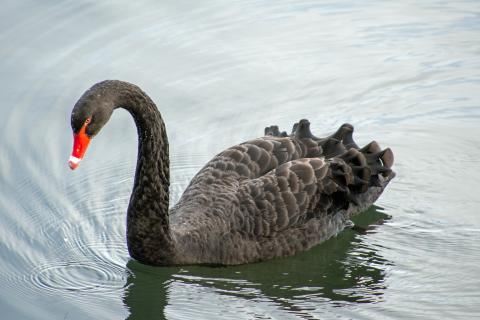